Tuesday’s gathering did bring the duo together, just not in the way Barron and McGee expected.

Initially paired together on Team Puget Sound, McGee and fellow Central Kitsap teammate Owen Davies found out during warmups that they needed to switch their red jerseys for black ones and join Team Cascade.

The reason? The teams were too lopsided numbers-wise and tournament director Rick Walker needed to balance things before the opening tip.

McGee and Team Cascade ended up getting the better of Team Puget Sound, holding on late for a 79-74 victory. Barron pulled Team Puget Sound within 77-74 with a 3-pointer late before Team Cascade’s DeAnte Ward, of South Kitsap, put the game away with a layup in the closing seconds.

Barron and McGee grew up playing against each other in pee wees before joining forces in seventh grade at Ridgetop Middle School in Silverdale. The pair also played AAU ball together for Total Package, led by Olympic College men’s basketball coach Craig Murray.

As seniors, the duo played pivotal roles for their high school teams this winter: Barron averaged 20 points per game for 13-win Olympic, which fell one win shy of reaching the Class 2A state tournament in Yakima, while McGee averaged 11 points, 4 rebounds, 3 steals and 3 assists per game for a 14-win Central Kitsap team that placed third in the South Sound Conference.

“It would have been our last time playing with each other, but it was fun though,” said Barron, who won the opening tip against McGee and had a nice block in the lane against his rival for the night. “It was fun to get in with the guys and compete.”

“It goes by so fast,” Barron said.

In the boys’ hot-shot competition before the game, Klahowya’s John Hartford edged Crosspoint’s Alex Weirth in the finals. It was a battle between two league MVPs as Hartford was named the Olympic League 1A most valuable player this season and Weirth earned the Sea-Tac 2B most valuable player award.

In the girls’ game, Team Cascade knocked off Team Puget Sound 44-27. There was a shortage of bodies for both teams as Team Cascade suited up five players, including four from North Kitsap: Maddie Pruden, Raelee Moore, Alicia Goetz and Julie Tweiten. The Viking quartet was joined by Bremerton’s Roxanna Dunklin. 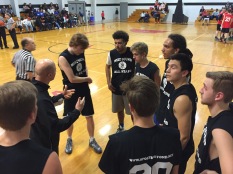